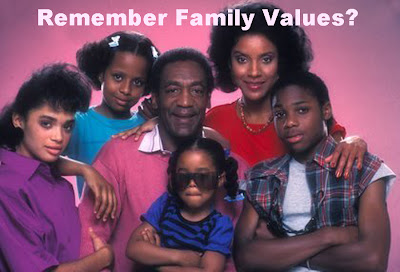 Yesterday while listening to the radio in the morning, like we always do, the trivia question for the day was this: "What piece of household furniture is becoming obsolete?" The answer was the dining room table. They went on to say that most people don't use a dining room table anymore. Most people eat in front of the television..... I think it was something like 74% of Americans eat in front of the television instead of as a family at a table.
Recently, I heard some of the teens I work with discussing a show called "Pretty Little Liars" so I decided to watch a few episodes on Netflix to see what all the buzz was about. OMG. Seriously??? This show is Desperate Housewives for teenagers! One young 16 year old is having a sexual relationship with her 26 year old teacher, another teen is always boozing it up, one of the girls is always alone with no guidance and all the adults are portrayed as morons, devoid of any values, and who have no clue what their kids are up to! THIS IS WHAT TODAY'S KIDS ARE WATCHING, GLORIFYING, AND PERSONIFYING! This is why we don't have TV in our house... garbage!
I hate to sound old here but... remember the days when television shows had values? Take The Cosby Show, for instance. I loved that show! The parents were hands on, always made time for the kids, they ate together and encouraged one another, AND they showed affection. How many shows today are there where you see the parents hugging their kids before school and telling them that they love them? How many shows portray kids actually talking to their parents about something really important? Unfortunately, not the ones the kids are watching!
In my house growing up, we watched television every single night but not until after we ate dinner at the dining room table, cleaned the kitchen, did our homework. Then, and only then, did we watch television together with our parents. We would have never been allowed to watch shows like Pretty Little Liars or The Secret Life of the American Teenager. We watched Growing Pains, The Cosby Show, Who's The Boss and others but, we watched them together. If there was ever a show in which they covered something "mature" then my parents would be there to discuss it.
Believe me dear readers, I am no prude. I love a good drama from time to time and even a horror movie or two, but we have to find the balance. No, I don't mean a way to balance our dinner on our knee while watching the TV, I mean find the balance between mindless crap and healthy values. Share meals with your children and talk with them instead of watching TV; make it a priority. If you let your kids watch TV, watch with them and choose programs that don't undermine the family. Remind your kids that the things they watch on TV do not represent real life. Remind them that in real life, there are consequences for their choices, that people actually have to have money to pay for things, that teenagers rarely look like super models all of the time and that reality TV is sensationalized, not reality. So today, hug your kids, tell them you love them, teach them the values you hold dear, and Live Inspired Now!

Need help getting your kids/family back on track? Contact me for a free consultation today!
Posted by Live Inspired Now.... at 11:31 AM