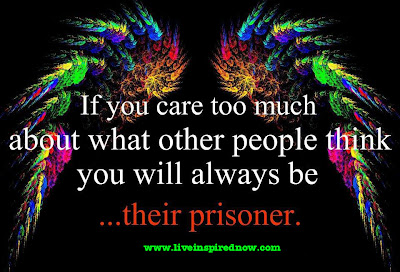 We are always at our best and strongest when we are living in alignment with who we truly are. Never try to become someone else or act in a way that is out of character for you. YOU don't have to be anyone but you! When we put on a facade we tell our own souls that we are not good enough, that we could not be accepted as we are.
We all wear many hats and have to act appropriately in our surroundings. You might not act the same way at work as you do hanging out with your friends and that is OK. It is good to understand what is appropriate behavior for different social settings but don't change who you are at your core. You can alter behavior but don't alter your values. Don't jump on the bandwagon when it rolls through just because that is what everyone else is doing. Don't go along with things you disagree with because your friends are doing it. Don't let anyone pressure you into doing or being anything that you don't align with. If you ever make a decision that you don't feel is right because you are afraid to lose someone, that person is probably someone worth losing. For example, many years ago I had a friend who was constantly going to bars and drinking because she thought her boyfriend would leave her if she didn't. She didn't want him to think she wasn't fun, she thought he would leave her if she was too "serious." She was essentially making herself a prisoner. She was doing things to make him "stay" with her but she was totally unhappy. I wondered how long it would take her to realize that the happiness she sought in him would never be found while she hated herself. She eventually broke up with him and moved forward and she learned that you cannot find happiness in being someone you are not.
So today, be yourself, don't compromise your beliefs, opinions or values for anyone and Live Inspired Now!
Posted by Live Inspired Now.... at 8:11 AM