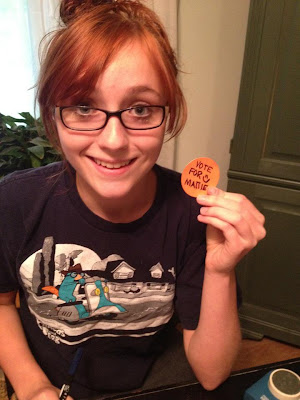 Yesterday, my daughter Mattie told me she was running for Secretary of her class at school. While we were talking about it, she mentioned that she really wanted to run for President but thought she had a better chance at getting Secretary. I told her, aim higher, RUN FOR PRESIDENT! I would rather see her run for President, give it her all and fail then to settle for something she didn't really want because it was easy to get! She agreed and got very excited about the idea and I helped her write a really great essay about why she should be allowed to run. By the end of it, she was making "Vote for Mattie" pins and was more determined than ever to give it her all! I could not be any prouder! Folks, so for GOLD, don't lower your standards for what you want to achieve, take a risk and if it doesn't work learn from the experience and it may work next time. Keep giving it your all! So today, think of something you put your ALL into and Live Inspired Now!
Posted by Live Inspired Now.... at 10:23 AM