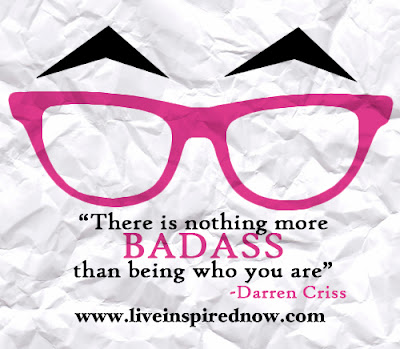 Being badass has everything to do with attitude and being true to who you are. A badass person marches to the beat of their own drum without regard for what others think of them. They also don't hurt other people... bully's aren't badass, they are usually scared and lack any confidence. People who stand up for others are badass. Badass people follow their dreams even when others say "it's completely unrealistic!" Nelson Mandela, Albert Einstein, Rosa Parks, Sylvester Stallone, Walt Disney, Dalton Sherman, Derek Redmond, JK Rowling are all examples of badass people who did something amazing, something that others told them they couldn't or who showed extreme bravery when others would have walked away. There are so many more examples... who do YOU think of when you think of badass? Today, channel YOUR inner badass, stand up or speak out, do something amazing and Live Inspired Now!

PS: Check out my "upcoming workshops" page; I am hosting a "Becoming Badass" workshop that you will want to participate in! (It's a teleconference so you can listen in from the comfort of you own home!)
Posted by Live Inspired Now.... at 10:04 AM