Care for your elderly.... 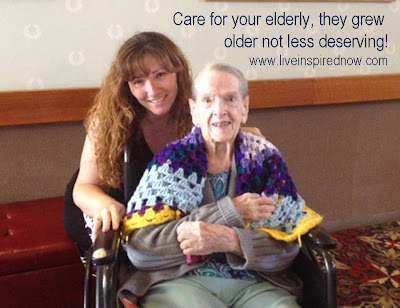 Last week I took Carrie to Rhode Island for her 12th birthday. She had 3 wishes: go to the beach, go to the "big mall," and spend time with family. We had a blast even though we weren't able to get to the beach because it rained and was chilly the entire visit.
The last day of our trip we visited my Aunt Rita who just went to the nursing/rehabilitation home. She is 90 years old, she fell at home and broke some ribs, and her doctor ordered her to the nursing home to recover. My Aunt Rita had very long hair that was always kept in a neat bun in the back of her head for the past 40 years. Upon arriving at the nursing home they told her she gets to visit the beauty parlor and they whisked her away. They washed her long beautiful grey hair that she spent 40 years growing and before she knew what was happening, they cut it off right up to her neck. She was horrified and demanded to know why. They explained that it was policy because long hair was "unsanitary." They didn't even discuss it with her first; they cut first, explained later. My aunt was very hurt and although she is 90, her faculties are still in tact. She is as coherent and intelligent as she always was; she is just older. Aunt Rita is taking all these new rules and changes in stride but she did tell me that she was "working her Irish up so she could give them a hard time!"
I love my Aunt Rita. She is one of the classiest women I have ever known. She is down to earth, very thoughtful, and always positive. It breaks my heart to see such a beautiful soul treated like she isn't able to make decisions or have a role in her own care. Her body is old but her mind is completely intact and she doesn't appreciate being treated as though she can't think. I watched several of the nursing staff walk around and speak condescendingly to the other patients as if they were unruly teenagers. Although some of the patients needed higher levels of care, most seemed to be mature men and women who would appreciate being treated as such.
The nursing home was a very nice place; clean and luxurious and could be a lovely place to recover or spend your remaining years if you can't live alone but some of the policies and attitudes could be improved. People need to treat the elderly like they are people; with dignity, compassion, and kindness. Unless they are mentally unable to care for themselves, they should be involved in the decisions being made for them. They should be told what the medications they are given are, they should be asked before they get their hair cut off, and they should be listened to. So today, if you have an elderly person in your life, spend some time with them. Listen to what they have to say, appreciate the years they have spent on earth and maybe even learn something from them. Treat the elderly in your life with kindness and compassion, and Live Inspired Now!
Posted by Live Inspired Now.... at 10:34 AM