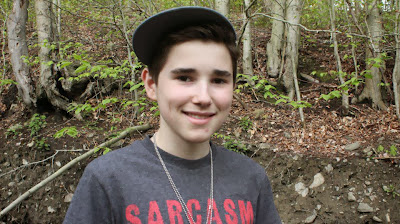 Harry came home the other day with a detention slip! What? Yes, Harry... who gets straight A's and B's got a detention! He had to stay after school for 2 days in a row for his crime. He..... jumped in the hall and touched the ceiling tile.

The school sent a notice home with his referral in it. There were 16 offenses to choose from ranging from defiance and disrespect to violence, and weapons. Harry got the "other" check box. His other box had a line for a brief description which read: "Climbing wall in hallway with his feet."
I really have to laugh at this. I totally support the school in giving Harry a detention for breaking the "do not jump off the walls to try and touch the ceiling" rule. I told Harry, it's their house, and you broke their rules, so you have to deal with their consequences.

However, the fact that the list of offenses were all really big violations to obvious school and even public rules and laws, it seems rather inconsequential to "jump off the wall" and get detention. This seems to be the norm in schools these days though. Kids are expected to step inside a box and never venture out, let alone JUMP out! Kinesthetic kids are too often labeled "ADD/ADHD" when what they really need is a venue in which they can have more physical activity. Adults often face the same challenges when sitting at a desk all day. We as humans were not meant to sit still and be quiet all day. We are built to move around and stay active and we learn much better when utilizing all of our learning modalities too. Engaging kids physically, as well as through visual, and auditory means is the best way to have them actually pay attention and absorb what they are learning.

I told Harry to serve his time, and to follow the rules in the future. He graciously served his 2 day detention after school and we had a good laugh about his offense of "other." I told him that if he had to get a detention, I am glad it was for "other" and not any of the real crimes! Encourage your kids to deal with the consequences of their actions, even if they don't seem fair or just. It is important that they learn to respect the rules of others, and to be honorable if they make a mistake. That is the most important lesson. Talk to your kids, communicate openly, enforce consequences, encourage them, and Live Inspired Now!
Posted by Live Inspired Now.... at 7:06 PM