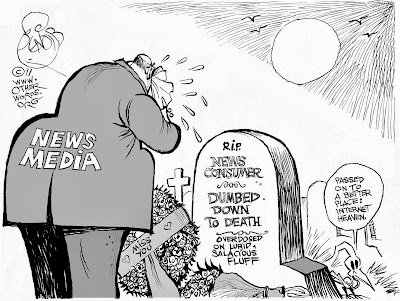 Every sensationalized news story that you get sucked into is like another shot of drama drug straight into your system. You become addicted quickly and you start looking for the next big hit of drama until you eventually become a reality TV junkie. Spending your free time watching attention starved divas fight for their man, sitting on the edge of your seat to find out who's the baby daddy, or making bets on who will be voted off next. Watching with secret hopes that something catastrophic will happen on screen so you can say "yes, I saw what happened, I was there!"

The news headlines pull us in, sometimes kicking and screaming. Have you ever clicked on a news story KNOWING you were going to regret it? Have you ever given in to the temptation of clicking on "Most Americans Are Totally Cool With Smoking Weed At Gay Weddings!" Yes, that was an actual news article from the Atlantic Wire. The article was about two prominent cultural topics: marijuana use and gay marriage. They intertwined the topics to create a sensationalized headline that received far more clicks than if the headlines merely stated: More people support gay marriage and legalized marijuana than in previous years. At no point in the article does the author mention celebrating a gay couples nuptials with a joint and feeling "totally cool" about it with "most" of the other guests.

Remember when Michael Jackson "dangled" his baby off a balcony? When in actuality, he showed his baby off to the crowd below from a balcony. I don't agree with what he did, but at no point was the baby dangled, he had 2 firmly gripped arms around the child. Or most recently, when Obama "caught a lady who fainted behind him?" She did get slightly wobbly on her feet but she didn't faint, nor did he catch her. He simply turned to her, it looked like he took her hand, then offered her some comforting words for a moment until another women led her away. I guess nobody would click on "Michael Jackson showed his baby to fans" or "Obama said Your OK, to a women who got dizzy."

Hows this for an accurate headline? "News peddlers control brains of unsuspecting drama junkies hungry for their next fix! Oh, in fact, I think I should use a portion of that title for this post!

Parents: kids are especially susceptible to sensationalism in the media. They hear about school shootings and learn to be afraid. They hear about bullying and think it's inevitably going to happen to them. Or, they hear about suicide and immediately it becomes an option that they might not have considered previously. Please be careful about what your children hear and watch. Sensationalized drama is addictive and can be harmful, specifically to the most impressionable among us: kids.

My point in all this is not to get so caught up in manufactured drama that you forget to enjoy actual reality. There is an entire world of sensational sights, romantic moonlit moments, and exciting successes to take in and celebrate! Promote positive living to kids and teach them to be discerning of what they see and hear. Get caught up in your dreams, go out and discover new things, share an adventure, enjoy every moment, create happiness, set a good example for young people and Live Inspired Now!
Posted by Live Inspired Now.... at 9:01 AM