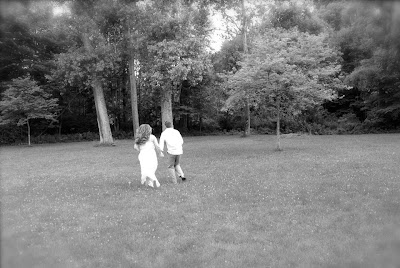 Once upon a time there was an inspired princess. She was the most beautiful princess of all time,  with long red curly locks of hair that often overwhelmed her freckled, fair skin. The princess had an incredibly compassionate heart and always prioritized the needs of her people above her own; they loved her very much.
The princess herself had but one wish. She wished for true love. As a child she had heard a story of another princess in a far away land that kissed a frog and released a prince charming so she vowed to kiss frogs until her prince emerged.
The princess occupied her days with helping everyone and making other people very happy. In her spare time, she "kissed" every frog she came across, looking for the man of her dreams. Magnificent princes rode gallantly into her kingdom to court the inspired princess but she quickly sent them away; after all, they were not frogs and she knew that she was to rescue an ugly old frog from his tortured existence. So on she went, helping everyone, kissing frogs, and avoiding princes; and she did this for years.
One day, she woke and didn't feel as inspired. She wondered why she was spending her days sharing her wealth and helping others, and still had not been rewarded with the one thing she truly wanted. How much longer would she have to give unselfishly only to return to her castle each night, lonely. It seemed as if she had lost her inspiration. She stopped leaving her castle and helping the people, and vowed to never kiss another frog.
One day, a knock came upon the large castle door. The sad, uninspired princess opened the door to see a very handsome prince standing before her with a large basket overflowing with baked goods, fresh fruit, vegetables, and hand made crafts. The charming prince told her that the townspeople missed her and had put together their finest offerings and had asked him to kindly deliver them to her with their love. The princess was moved to tears and invited the prince in to the castle. They shared baked goods from the basket and swapped stories for hours. Later, as the prince was preparing for his departure, she kissed his cheek and thanked him for the best day she had in years.
The princess returned to town after that and continued her work: caring for the sick, feeding the poor, and generously sharing what she had with her people. Eventually, she and the prince fell in love and on the day they were to be married the princess thanked the towns people for sending the prince to her. She also thanked the prince for helping her to see things clearly. She had been so busy trying to save frogs, she forgot to save herself.
The Inspired Princess and Prince Charming were married. They presided happily over an abundant and joyous kingdom, and lived inspired and happily ever after!
Posted by Live Inspired Now.... at 11:36 AM