What the last bed in the shelter meant for my new friend! 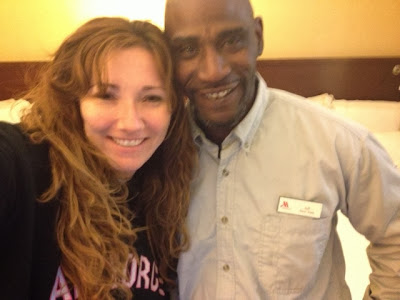 I was sitting in my hotel room and ready to cry, again... it had been an emotional day! I was feeling very overwhelmed by looming project deadlines and from being on the road for the past month. Just when I was about to retreat from my long day and dive into a molten chocolate lava cake, there was a knock at my door. I had asked the room service guy about the loud noise coming from the heat vent and he said he would send someone right up. What I didn't know is, he would be sending up a new friend.

Jeff, the hotel engineer, entered my room and jokingly said "what did you do?" I forced the tears back and said "I don't know what happened, it was fine but then it just started making this loud clanking noise." It took Jeff no more than 60 seconds to make the heat vent stop rattling; we spent the next hour plus just chatting. I am not even sure how we got going on such deep topics but he gave me permission to share his inspirational story.

Upon hearing about my work with under privileged children, Jeff told me of his upbringing and how he believed that the African American community was falling apart. His young life started with tragedy when his mother was shot when he was only 4 years old. He and his 5 siblings went to live with his Grandmother in a lovely but mostly white suburb. He clearly loved and respected his Grandmother and had nothing but praise for her. She raised her own 5 children and then took in her daughter's 6 children when she passed. Jeff said he often felt like he didn't fit in with the white kids because he looked different yet, the black kids didn't accept him because he was "well mannered and spoke respectfully." He felt isolated and desperately wanted to fit in.

Despite the love and generosity his Grandmother offered, Jeff made unfortunate choices and found himself using drugs and getting in trouble with the law. He spent time in jail and when he got out he moved to a half way house where he was able to stay clean for 2 years. Then, one night he chose to use again and he says it all flooded back as if he had never gotten clean at all. It was like the 2 years spent clean never existed. He did another stint in jail and was out again only to go back to drugs. At some point, rock bottom and near death saved his life.

Jeff had been admitted to the hospital after a fight. He needed 28 stitches in his face and eye area and he says the nurse kept coming into his room and saying "Are you sure you are alright?" Finally, after  this happened several times, he asked the nurse, "Is something wrong with me? Why do you keep asking if I am alright?" The nurse then explained that he had experienced a major heart attack.  Jeff had been so high, he didn't even feel it! Jeff was admitted to the hospital and had decided there was no way he was staying. He was plotting his escape when the nurse brought in his medication. He drank the medicine and then asked what it was.  He found out it was methadone and just as the medicine knocked him out; his escape plan had been foiled! With tears in his eyes, and after apologizing for becoming emotional, Jeff told me that he believes God intervened to keep him where he needed to be.

While in the hospital, Jeff met a man with AIDS, that had lost a leg to diabetes, and was about to have a kidney removed too. This man inspired Jeff by letting him know that though his time was very limited and he had lost so much, at least he could say "Today, I am clean!" He talked to Jeff about the importance of staying clean and sober and making the best choices he could.

Homeless, penniless, and busted up, Jeff had no place to go when it was time to leave the hospital. He had one last hope and that was a bridge he thought he had already burned. He called a shelter where he had stayed before. They remembered him and although they were reluctant, they said they would give him a bed but ONLY if he got there before 2am. It was 1:30am and he was at the hospital on the other side of town. Jeff said he wasn't going to lose this opportunity like everything else he had lost. Jeff, after spending time in the hospital for a heart attack, brutal physical beating, and completely doped up on drugs, literally ran all the way across town and made it to the shelter by 2:00am. It was there, that with help, he made the choice to put his life back together.

After some time, and many drug and alcohol meetings later, Jeff started looking for jobs which was proving to be very difficult with years of prison gaps in his employment history. He heard about a job here at the hotel and applied for a maintenance position. In yet another instance of divine intervention, Jeff got an interview because the hiring manager went to the same high school as Jeff, so he gave him a chance. That chance, along with Jeff's hard work and determination for a better life brings us to today. Jeff has been with the hotel for 18 years, has been clean and sober for 19 years, and is now the head of his department! He takes 100% of the responsibility for the bad choices he made, yet offers most of the credit for his recovery to the people who helped him out, and to God for not giving up on him.

Jeff is grateful that he is no longer dependent upon the "system" to take care of him. He works hard and earns everything he has. He spends much of his free time talking to the dis-advantaged youth in his community and trying to teach them about "freedom." He want's them to know that a small welfare check and a cheap apartment in the projects is not freedom, Rather, he feels you are a slave to a system that will never let you rise above your circumstances. He want's the young people to be free to go to the movies, take trips to Europe, laugh and enjoy their youth before they start to have babies. He want's them to appreciate the small things, and to know how good it feels to make positive choices and to inspire others. He want's them to know that drugs will rob them of youth, and wants them to make choices they won't regret when they are older. I have no doubt that Jeff is doing wonderful things to inspire the youth in his community. Jeff told me that when he lays down each night, it is just him and God. He prays, and thanks God for his blessings. He is grateful, he is happy, and he is an example of how life can be awesome if you decide to make it so!

I know it seems risky to befriend strangers who come to your hotel room, but I truly believe it is a much bigger risk to shut out people who may be in your life for a reason that you don't even know about. I can't be certain why our paths crossed but I am grateful to be able to share his story!

I emailed this post to Jeff before I shared it with you and he loved it. He shared this quote with me that he keeps next to his bed in a frame he purchased while volunteering at the Salvation Army: "Within the maddening maze of things, When tossed by storm and flood, To one fixed trust my spirit clings; I know that God is good!"